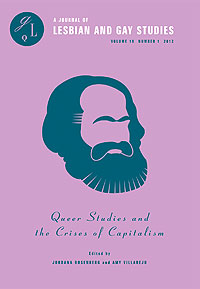 Extending the recent rapprochement among queer studies, Marxist theory, and political economics, this timely issue responds to the current crisis of capitalism. Contributors consider how methodologies of queer studies are specially poised to reveal the global, historical, and social dimensions of capitalist economic relations. Using queer hermeneutical tools in combination with globalization studies, secularization studies, and queer-of-color critique, contributors examine global economic history and the ideological collusion of capitalist production and biological reproduction. With a special emphasis on the regulation and policing of sexuality, the issue explores the assertion that capitalism is only made possible by systems of racial, sexual, and national exploitation, and recuperation from periods of crisis depends on the increasingly violent reassertion of those forms of exploitation.

Queer studies has, from the outset, engaged vigorously with the question of how cultures metabolize social and economic developments. Several contributors explore the shared queer and Marxist fascination with concepts of utopia and their mutual reliance on theories of totality with respect to the intersecting forces of sexuality, desire, and economic value. Providing an expansive theoretical perspective on current and historical economic patterns, the queer methodologies at work in this collection illuminate and advance our understanding of the complex structures of global capitalism.

Jordana Rosenberg is Assistant Professor of English at the University of Massachusetts Amherst.

Amy Villarejo is Professor in the Department of Theater, Film, and Dance at Cornell University. She is the author of Lesbian Rule: Cultural Criticism and the Value of Desire, also published by Duke University Press.