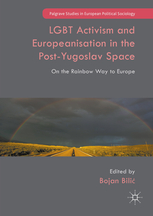 Europe and the European Union are unavoidable, if ambiguous, political references in the post-Yugoslav space. This volume interrogates the forms and implications of the increasingly potent symbolic nexus that has developed between non-heterosexual sexualities, LGBT activism(s) and Europeanisation(s) in all of the Yugoslav successor states.

Contributors to this book show how the long EU accession process disseminates discursive tools employed in LGBT activist struggles for human rights and equality. This creates a linkage between “Europeanness” and “gay emancipation” which elevates certain forms of gay activist engagement and perhaps also non-heterosexuality, more generally, to a measure of democracy, progress and modernity. At the same time, it relegates practices of intolerance to the LGBT community to the status of non-European primitivist Other who is inevitably positioned in the patriarchal past that should be left behind.

*Bojan Bilić is Marie Curie Fellow at the Amsterdam Institute for Social Science Research, University of Amsterdam, Netherlands. He is the author of We Were Gasping for Air: (Post-)Yugoslav Anti-War Activism and Its Legacy (2012) and co-editor of Resisting the Evil: (Post-)Yugoslav Anti-War Contention (2012) and Intersectionality and LGBT Activist Politics: Multiple Others in Croatia and Serbia (2016).