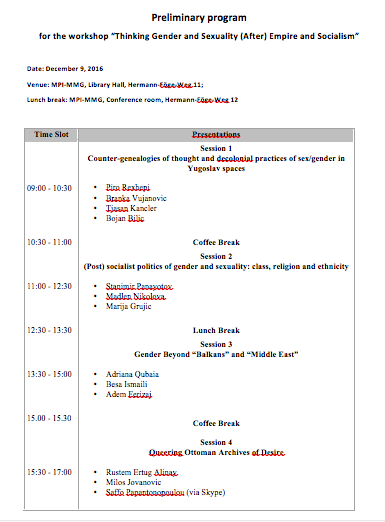 “Thinking Gender and Sexuality (After) Empire and Socialism” Workshop December 9, 2016

How can we approach ways of envisioning transformation and radical social change? How to tackle knowledge production on sex/gender in the context of reconfiguration and multiplication of European borders after the fall of the Berlin Wall in 1989? How to speak about the coloniality of gender, the global imposition of western Eurocentric feminist, queer and transgender knowledge, with the intention to shift the geography of reason, point to counter-genealogies of thought and decolonial practices of resistance? In this context, we want to discuss the zoning of the Balkans as the buffer space, a borderland, a frontier that in being designated for integration into the European Union, its task becomes the enactment of borders further East and South, especially in times of precarious bodies being actively pursued for death at its borders. How do gender and sexual projects figure in these processes of Europeanizing the Balkans?Here we see an opportunity to merge critical postsocialist, postcolonial and decolonial theory to think about the spatial and temporal fragmentation of the Balkans from the subaltern imaginary through the invitation to belong to “Europe”. Moreover, these processes are taking place in the midst of neoliberal hegemony which in the “semi-periphery” is resulting in the reconfiguration of class, race, gender, sexuality, race, and ethnicity. In this context, how to decolonize solidarity in the (post)socialist and post-Ottoman context contesting neoliberal European bordering strategies that fragment “peripheries” along civilizational and racial hierarchies?