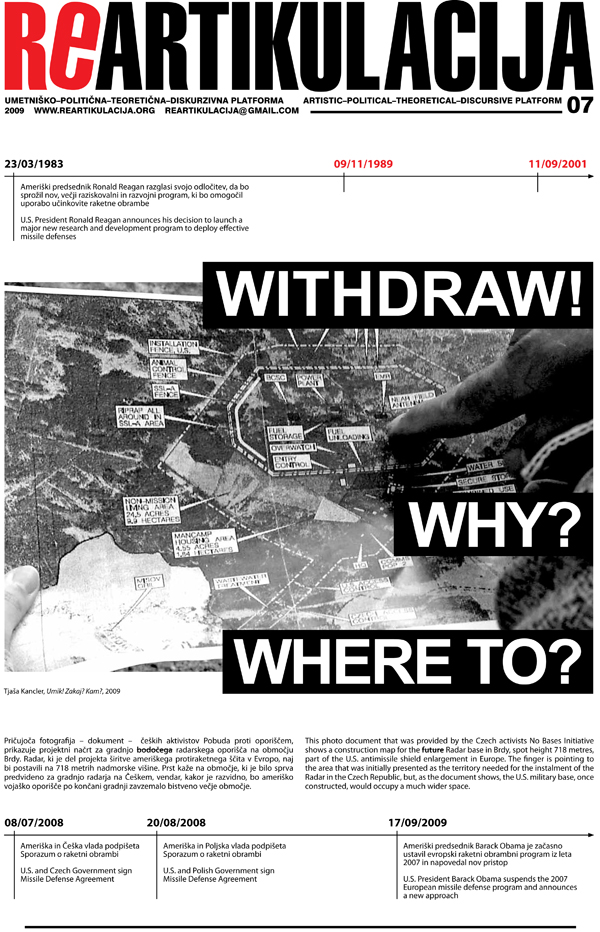 REARTIKULACIJA #7, 2009, DE-LINKING FROM CAPITAL AND THE COLONIAL MATRIX OF POWER, The Law of Capital: Histories of Oppression

In summer 2008, the Missile Defense Agreement was signed between the U.S./Polish and U.S/Czech governments to ensure, as it was termed, “our common security.”

On September 17th, 2009, U.S. President Barack Obama suspended the plans for placing missile interceptors in Poland and the radar base in Czech Republic. A new approach was announced that will provide capabilities sooner, built on proven systems and offer greater defenses against the threat of missile attack than the 2007 European missile defense program. The new system will deploy smaller SM-3 missiles, and will be, probably, placed somewhere in Southern Europe or Turkey.

The documentary, Hit-to-Kill, emphasizes political and strategic elements of the deployment of U.S. antimissile shield in Europe, entailing a dialogue between concepts such as security, global dominance, democracy, propaganda and resistance.

Presented here are some of the transcribed and edited excerpts from the documentary.

Santiago López Petit: Global age means global capitalism which starts symbolically with September 11, 2001; global capitalism means that reality has become completely capitalist. The global age is a time of uncertainty, anything can happen anywhere in the world. The discourse of security is that which has permitted the reconstruction of the Nation-State in crisis and, in the form of “War Against Terrorism,” has allowed unthinkable legislation to be introduced. Everything can be done, then; the discourse of protection in the background is the other side of the discourse of control.

Marina Gržinić: The relation between offensive and defensive strategy shows clearly, as it stands by the U.S., a process – part of the neoliberal global capitalism – of complete deregulation. This deregulation is always at work in such a way which, on the one side, promotes something as positive, and on the other, in its background, reinforces the policy of war. Deregulation produces precisely the opposite of what it actually declares.

Jana Glivická: One of the demands of the so-called Velvet Revolution in 1989 in the Czech Republic was, No More Foreign Troops, No More Foreign Soldiers. Over the last 20 years, this gradually changed; and those people like Václav Havel, our first president, who in the beginning of 1990s was talking about the dissolution of NATO (saying that if we do not have the Warsaw Pact anymore, then we don’t need NATO), was in fact one of the architects of our membership in NATO. So all this is gradually changing towards some feeling that it is natural, and that Europe is naturally the closest ally of the United States, no matter what the United States does. They could attack Afghanistan, they attacked Iraq, which according to the United Nations is an illegal war, but we do not care about this, we participate in these wars without doubting them. It is understood as something natural, and I think this is the biggest threat in general, because it’s really not natural.

Erazim Kohák: America is caught in a trap of its own fear. A classical example of this was Stalin. Stalin was very badly paranoid. Germans have the term Abwehr Psychose, the defensive psychosis. Stalin felt threatened by anyone whom he did not control, and I am afraid that the United States, since Reagan, has been going in that direction – the feeling that the only country which is safe is one in which America has a base, which America controls. The Bush Administration was very much committed to finding external enemies, because it used them to mobilize public opinion; we are threatened, therefore, it’s a mobilization impulse. This is not going to change over one night; it is changing, but even Obama cannot change it overnight.

Marina Gržinić: The possibility that there will be a change in U.S. politics is actually a fake one, because financial capitalism, and we can see this very clearly, is getting its force precisely through provoking the crisis. So this deregulation, this instability, is something that is at the core of the functioning of global capitalism. Every layer of the capitalist system is infected by capital’s interests. Instability, and making profit from it, is something that is happening at every layer, which also means that mass media, as well, is functioning hand-in-hand with the needs of the system. I tried to explain this capitalism function with deregulative processes on the one side and disinformation on the other. I think it is important also to understand that the positions of the Czech Republic and Poland cannot be seen outside of the European Union. The whole policy of the constitution of the European Union, as a kind of extra territory, as an exceptional territory, is connected with this process.

Roman Kuźniar: It is the most expensive business in the history of the arms race. Obviously there are threats which are objective, but then besides that, there are also big economic interests, huge, gigantic incoming interests, which are behind them. So the interest of big business and the ideology of American hegemony throughout the 21st century combined and then they started to develop this. They started to develop the global one, i.e., the global missile defense system, the one which, when constructed, credible and reliable, would give the United States a strategic hegemony, not even primacy, but hegemony for decades to come.

Jan Májíček: It was promised to be given – something like one billion Czech crowns – to the region of Brdy, to the small villages where the Radar should have been built. But with the fall of Topolanek’s government, they realised that they weren’t going to get anything; so now many of them have huge debts, because they had already started to make some projects.

Katarzyna Puzon: It can be seen from two sides. On the one hand, you can see it like a kind of danger that is right around the corner, but on the other hand, you can be persuaded that you have been chosen. It’s you, it’s your town (Słupsk, Poland), you know, there are so many places, but it’s your town, there are so many other towns that could benefit from this, but it’s your town. I think this kind of discourse was present from the very beginning, in the media as well. We were just promised so many things, it was a question of visa, of being a friend of a superpower, and many issues were raised, look at Iraq!

Andrew Zebrowski: I think you have to look at the question of war and peace as a whole – and the antimissile shield, it’s a very important part of the whole strategy of the inter-imperialist conflict, of countries resorting to war when they think that’s the only way they can be competitive.

Jan Májíček: They told us that this system should protect us from so-called rough states, like North Korea or Iran. But, basically, this is a division of European territory; it’s a plan to divide Europe, to have not a united Europe, but a divided Europe, by these military bases. The United States has military bases in Germany, in Britain, they have them in Spain, some in Italy, and they would like to enlarge its military presence in Central and Eastern Europe, which is quite important for the strategic reason of encircling Russia. It is not about having this system in particular, but just to have any kind of military presence here.

Roman Kuźniar: I am a strategic analyst and I cannot believe in bullshit like that. So, if not against Iran, seriously speaking, then against whom? Against whom? Good question! They do not give us the answer against whom. If Russia, then tell us, because if it’s Russia, then that would mean that we are in structural collision, in contradiction with Russia; they want to bring short-range missiles to the Kaliningrad area, just in case, you see, you initiate something against Russia. So that’s risky for us, obviously, if they hit your base, fine! But if they hit the city (Słupsk), which is next to the base, then we are in trouble obviously, so it’s better to avoid it.

Miroslav Hroch: My opinion is strongly influenced by the fact that we have no information that we can trust. There have been at least three different explanations of what the Radar means, or, in other words, against whom we need to be protected. One version was, it is being built to protect the United States, this is the first version. The other version was, it is to protect us, the Czech Republic – if somebody sends missiles against the Czech Republic, it would protect us. I wonder who would send missiles to the Czech Republic. Why? Maybe in order to destroy this Radar; in this case, that would be a good reason to do it. And third was to protect Europe, which was the most nebulous explanation, but I have no information that I can trust about what I need to be protected against or if it is going to protect me at all. Or what consequences this Radar construction will have for future international relations.

Santiago López Petit: Today, the critical political discourse is not constructed so much on the horizons that we need to reach – big goals, big ideologies – but on what I would call “fragments of sense,” which are articulated around these gestures of rejection.

Jana Glivická: They signed two agreements, one main agreement about the building of this base, and the second agreement, the Status of Forces Agreement, or the so-called SOFA. What is strange about the first agreement is that it’s the agreement about building some specific military base, with no parameters on the building of this Radar. It does not say how big the area that they will use will be, and what is really a problem is that they can gradually develop all the installations that will be there without any restriction; it’s just a blanco cheque signed by the U.S. military. And the SOFA agreement is related to all U.S. military presence in the Czech Republic, so in the future, it will be less complicated to install any new base or installation, or to have the permanent presence of the U.S. army.

Jan Májíček: One very important thing, besides these two treaties, is that there was the third treaty being signed and it’s the cooperation between the Czech Academy of Science and some American military companies, so Czech scientists will be participating in military researches for new technologies.

Ellisiv Ronglien: After the Agreement was signed by the Polish government, it was not ratified by the parliament. I think there was a period of wait-and-see, from the government side, to see what would happen with the U.S. elections and what proposal the new U.S. administration would put forward, and in a way this is still the situation. This also means that there is much less debate in the media and much less going on around the issue of the so-called antimissile shield.

Filip Ilkowsky: We don’t know what will be with the whole missile defense project; that it will be just destroyed, I don’t believe it, it’s too much money invested and high strategic interests for United States are here at stake. But of course it can change somehow, you never know, if the bases are built here or maybe somewhere else. One of the Obama advisers said that maybe more infrastructures will be built on the sea that is much more effective than interceptor missiles, so in fact we don’t know. To take into account is of course additionally this whole crisis in the US economy that also can narrow some possibilities to build all this, or at least to make the whole project progress slower. But I think we shouldn’t believe that everything is over, because the logic is not really different, therefore everything is still possible.