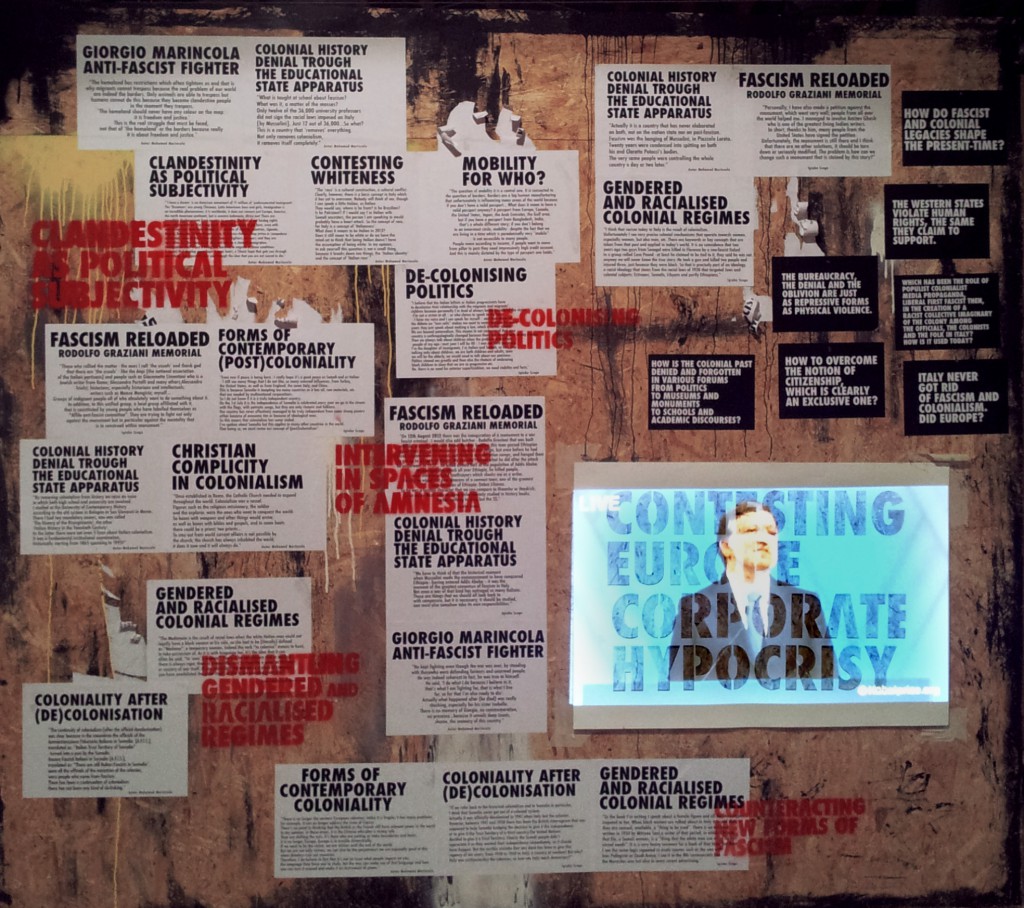 In the belly of fascism and colonialism
For a collective process of re-elaboration of the Italian colonial and fascist past and for the evisceration of the contemporary oppressive systems of imperialist powers in Europe and the global world.

“In the belly of fascism” is a trans-disciplinary project that deals with the intersection between Italian historical colonialism and today’s racism in contemporary Italy. The aim is to analyze critically the present Italian colonial matrix of power through the thinking and critical engagement of those who have the status of migrant cultural workers, including the so-called “second generation” migrants, that are precise regarding their post-colonial background, in order to acquire a non-Eurocentric genealogy of our European history.

What is necessary is in fact to start to think about us the “natural white” citizens of Italy and the EU differently; to see that our privileges and hegemonic positions are an outcome of the fully brutally conducted processes of dispossession, exploitation, discrimination, death and subjugation. Processes that were carried out historically and that are presently reinforced and perpetuated.

Therefore the project departs and insists on:

-an almost absent critical debate in Italian society of the impact of the colonial/fascist heritage on the contemporary migration flows;

-the racialised and gendered perceptions of the constructed representation of the “Other”;

-the ever-increasing restrictive racialised past and contemporary laws.

The reason for this project is in a need for learning and understanding in what consists the historical relations in- between fascism, colonialism and capitalism and how this history still shape the present time. The urge is to elaborate and practice strategies to dismantle the constant contemporary reproduction of racism, sexism, discrimination and subjugation all around.

During my research I came across a huge quantity of written material, from academic papers and literature, to journalists’ contributions. Through the process of reading I started to get self-formed on these topics that still need to be worked through, intensified and re-elaborated.

I want to list some names that helped contribute to my formation: Hamid Barole Abdu, Kaha Mohamed Aden, Ali Mumin Ahad, Rando Devole, Ubax Cristina Ali Farah, Antar Mohamed Marincola, Shirin Ramzanali Fazel, Gabriella Ghermandi, Igiaba Scego, Ribka Sibhatu, Maria Viarengo, etc. These are just a few of the many people who have had direct or indirect relationships with Italian ex-colonies and that are actively part of (socially and linguistically) the cultural spheres of production based in Italy. Their texts have been, for me, a basis to learn a part of history, which for many years was absent from my cultural background.

Relevant references, for me and for these authors as well , are some of the most dedicated and older historians on Italian colonialism, such as Angelo Del Boca, Alessandro Triulzi, Giorgio Rochat, Armando Gnisci and Nicola Labanca. The fact that these are all male historians is not by chance. White female historians have had a marginal status in Italian academia. In recent years the number has increased and among other experts on colonialism we can find Sonia Sabelli, Franca Sinopoli, Lidia Santarelli, Cristina Lombardi-Diop and Caterina Romeo. To find non-white historians and professors in schools and universities in Italy is almost impossible and this is directly connected with well-rooted institutional racism.

I also have to acknowledge that the background of my interest is formed in the Academy of Fine Arts in Vienna in the department for Conceptual Art (called Post-Conceptual Art Practices) that opened lengthy research on the topic, debates and contestation as well as in relation to the post-Nazi condition of Austria as well. Therefore, my research is a not a specialization but has a strong connection to the processes carried out in the present day regarding the Nazi and colonial past in Europe and post Nazi condition in Austria.