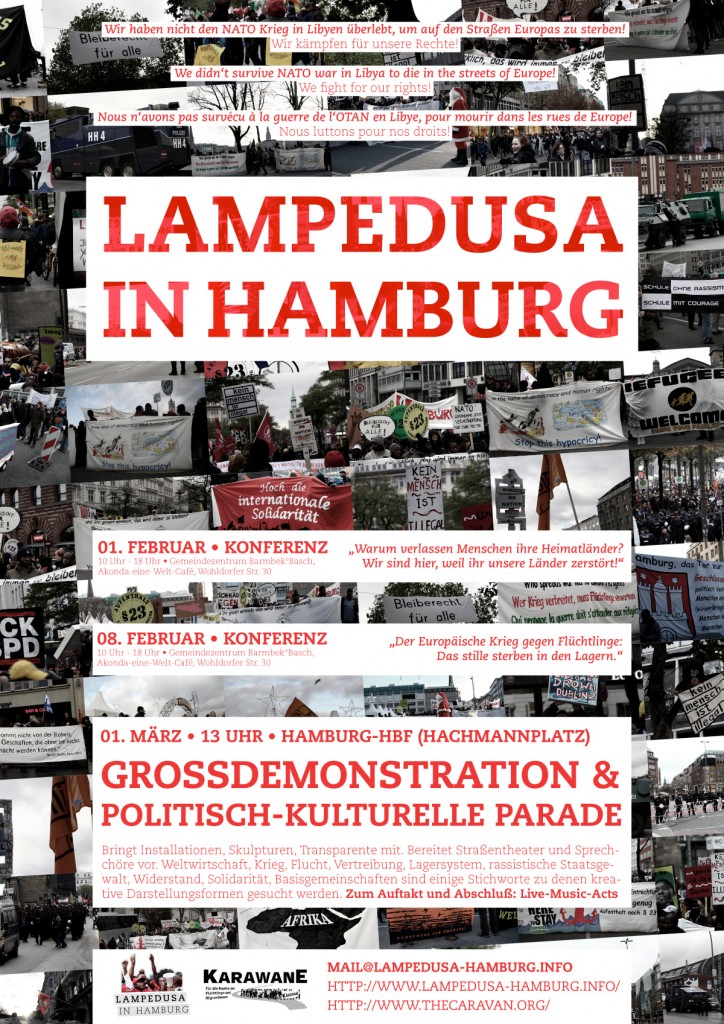 A new phase in our struggle!

One year after the termination of the European Union program “emergencia Africa norte”, one year living on the streets, three years after the NATO war in Libya, three years since the trauma of the war and the loss of everything except the bare existence, ten months in Hamburg, fighting for the recognition of our rights, ten months living between the solidarity of the society and the ignorance of the government, and yet, our lives and that of our families are still turned upside down. With time progressing and still without any perspective to a legal status of residence, which would enable us to finally start living a „normal life“.

The psychological stress of members of the group is growing. The statement „we did not survive the NATO war in Libya, to die on the streets of Hamburg “, often appears to outsiders as exaggerated. However, even before our arrival, people seeking protection and asylum in Germany have died. They die in the camps due to isolation, the deprivation of rights, and lack of access to essential supplies.

A refugee from a camp in Nördlingen in Bavaria recently described this in such a way: „Camps must be closed because we refugees die in these camps every day! People in the camps are so frustrated that they commit suicide. One goes to the physician, he only looks at you and says you are healthy, although one is dying internally “

In Hamburg in November 2013 Samuel Mensah died, because he was compelled to live on the streets as he did in Italy. A month before, members of our group found him acutely ill on the streets and took him to the hospital. In the meantime, we have lost several family members in our homelands. The situation of continually being denied the right to work, does not give us the possibility, to send money home for necessary medicine or hospital visits.

In the cycle of flight and deportation so many people lose their lives. The least affected are Europeans – with exception of the Roma, which are a section of the population pursued within Europe. We experienced a lot in the three years of our surviving in Europe. The image of a united, democratic, humane, civilized Europe, which Europe conveys in our various countries, does not have much to do with our experiences, nor does it have to do with the continuity of colonialism on our continent. We experience this daily through the ruthless exploitation of resources by Europe and the suppression of any striving for independence and sovereignty.

17 January marks the 53rd anniversary of the brutal murder of Patrice Lumumba, leader of the Congolese struggle for independence and first prime minister of the democratic Republic of Congo. This is one of the many political murders ordered by former colonial powers (why should one actually say former?).Thomas Sankara freed Burkina Faso from the colonial oppression and called for the anti-colonial unity of Africa. He only survived three years presidency, from 1984 to 1987.On July 23, 1992 the young socialist politician named Tavio Amorin was shot dead openly on the streets. His resistance against the regime, that was backed-up by Europe, attracted popular support and frightened the regime.

Those, who openly opposed the misery, that is imposded on us, were assassinated and the murderers where often installed as presidents, not by the power of the people but by weapons, which Europe sold to its new vassal in exchange for the unobstructed plundering of the bitterly needed raw materials.

More misery, more weapons, more violence, more insecurity, more people flee. Africa may not be independent, because Europe is dependent on Africa. That is a part of the truth about the NATO war in Libya, the division of the Sudan, the war in Mali and also Central Africa. The Congo, the heart of Africa, bleeds since the arrival of the Europeans on the continent still heavily. Back then, our ancestors were put in chains and kidnapped to other continents, today, we the descendants, are put in chains and deported to our continent.

The image of a united, democratic, humane, civilized Europe, which Europe conveys in our various countries, does not have much to do with our experiences. Europe calls itself a union and a reliable international community of states, whereas, regionally and from country to country the division between poverty and wealth is extreme.

Today in times of the European financial crisis we hear that approximately 100 Icelanders leave Iceland daily due to the high unemployment rate and poverty prospects. In the news we hear about the fear of western Europeans about the immigration of Bulgarians and Romanians, who are now the citizens of the same union.

We hear that Germany needs skilled workers of many fields, while we are refused a work permit at the same time. Are we more profitable for the economy on the irregular job market or is it just state racism? For our brothers and sisters, who lose years of their life and health vegetating in German asylum camps, this question does not arise anymore.

Racist are not only the past police controls of our people in Hamburg, which fortunately, was strongly condemned by large parts of the society. Racist is the whole system of highly organized isolation, from the special treatment in the camps, to food packets, food and clothes vouchers, “Duldung“, detention and deportation.

Racism was what we experienced regarding the actions of the Hamburg senate.
We say, we would be not here, if we had been able to survive in Italy but when questioned this by school pupils, the Mayor of the city responded by saying „… Italy is a beautiful country….“, We have realised that there is no intention to speak with us but what we do not understand is that many do not see this as racism. Without the NATO war in Libya, we would not be in Europe.

We should live and die on the streets of Europe, from the perspective of the Senat of Hamburg not in Hamburg but in Italy. If the laws say this, then these are racist laws and a society that accepts this, must call itself racist.

Supporters have added „We are more“ to our slogan „Lampedusa in Hamburg – We are here to stay“ and together we can learn to overcome racism and break the colonial chains. Over the past few months several people of various origins have visited our protest tent for information, to seek advice and assistance and to declare their solidarity with us. Others have come simply to get some bread or water.

A lot has happened regarding our struggle for the recognition of our rights and we are still overwhelmed by the enormous solidarity and sympathy in Hamburg. While at the beginning, our voice and our situation stood stronger in the center of public debate, today, it is the positions and actions of supporting circles within the broad solidarity movement, which now determine the public debate.

Attempts to hamper our efforts at self-determination have occurred and the dice have been and remains loaded at our expense as expected in every struggle. It is important to recognize this without getting stuck, therefore we want to direct the point of view back towards the core problem concerning us.

The experiences of the resistance

the importance of solidarity and the development of reliable structures which contribute to building up sustainable, communities and explore answers to the question „what does one do? “

First Conference  Title: “What forces Africans to search for a new life in Europe? – We are here, because you destroy our countries”
Saturday, 01 February 2014, 11°° clock to 18°° clock,
Gemeindezentrum Barmbek°Basch, Akonda-eine-Welt-Café, Wohldorfer Str. 30

- Introduction by Dr. Boga Sako Gervais, political refugee and human rights activist. Due to his political commitment he was forced to leave his country,the Ivory Coast in west Africa and currently lives exile in Europe. Dr. Boga will give an overview of the general situation, global politics  and international relations which reinforce migration pressure in Africa by promoting dependency and exploitation
– Country report by Maissara M. Saeed, political refugee and human rights activist: The Sudan, case example of flight and expulsion in a historical context – from the anti-colonial resistance to the current division of the country
– Olaf Bernau, Afrique-Europe-Interact and refugee activists from „Lampedusa in Hamburg“: landgrabbing, uranium mining and resistance in Mali
– further reports are requested: Ivory Coast, Mali, Kongo
– Dr. Norman Paech, professor for international, humanitarian law, will give a lecture on International Law and the NATO with a focus on the war in Libya 2011
– Further contributions and film documentations on transcontinental workings of European/German companies
– Additional reports by members of “Lampedusa in Hamburg”

- Introduction by Rosa Amelia Plumelle-Uribe, writer and scientist, Author of the book „white barbarism “, from colonial racism to racial policies of the Nazis
– Short film “The great Hamoudi” conversation with Eric Madi about the living conditions of unaccompanied minor refugees in the German asylum system
– Fortress Europe and Frontex – the strategic importance of the war against flight and migration by Afrique-Europe Interact
– Processes of destruction – isolation and deportation in Germany, Structures of self-organization, Civil disobedience and government persecution
contribution by Rex Osa, the VOICE Refugee Forum Baden-Württemberg
– Supplementary reports by refugee activists Jerry Bagaza from Wolfsburg and Ali Safinaou Touré from Hamburg and representatives of the refugee women conference –

The detailed program is in preparation.

It is our aim that the procession visualizes ideas of the protest with as many different installations and sculptures as possible. World economy, war, flight, expulsion, refugee camp systems, racist government and authorities, resistance, solidarity, and local communities are some references to the different forms of creative representation we are searching for. Live Music Acts are also part of the program.