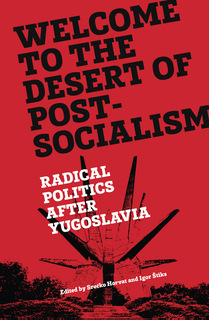 This volume offers a profound analysis of post-socialist economic and political transformation in the Balkans, involving deeply unequal societies and oligarchical “democracies.” The contributions deconstruct the persistent imaginary of the Balkans, pervasive among outsiders to the region, who see it as no more than a repository of ethnic conflict, corruption and violence. Providing a much needed critical examination of the Yugoslav socialist experience, the volume sheds light on the recent rebirth of radical politics in the Balkans, where new groups and movements struggle for a radically democratic vision of society.

*Srećko Horvat is a philosopher and author of several books, including What Does Europe Want?, co-written with Slavoj Žižek. He has written for the Guardian, Al Jazeera and the New York Times.

*Igor Štiks has won numerous awards and been translated into a dozen European languages. His novel A Castle in Romagna was the first of his books to be published in English.