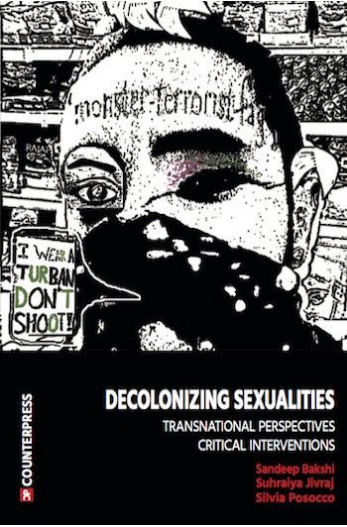 Decolonizing Sexualities brings together creative, activist and scholarly contributions on the diverse ways in which sexuality, race and religion intersect in different national settings and transnationally. Contributors address the ways in which categories, theories and knowledge travel across locations or fail to do so and consider the political implications of such processes for differently situated sexual subjectivities. Queer of color critique emerges as a set of key analytical tools to deconstruct intersectional forms of oppression against and within marginalized communities such as processes of racialization and as a means to repoliticize ‘queer’ and build coalitions among communities of color, in particular in Europe (including Southern and Eastern Europe). The volume asks how the kind of knowledges dubbed as ‘minoritarian’ from (disciplinary) mainstream perspectives, such as ‘ethnic studies’, ‘queer studies’, ‘postcolonial studies’, ‘intersectionality’ intersect, travel and generate critical interventions for understanding a range of complex dynamics. These include for example, how multicultural manifestations are reined in to legitimate (homo)nationalist structures that draw upon long-standing histories of colonialism, and how a critical discussion of transphobia unsettles assumptions about the status of community and belonging.

Decolonizing Sexualities brings together a plurality of situated forms of activist analysis and intervention that address a range of cross-cutting challenges. The volume asks: What tactics are queer activists pursuing in terms of formal rights vs other understandings of activism? What are the possibilities, as well as the tensions in activist endeavors in different locations and transnationally? Drawing on diverse experiences of organizing at the intersections of sexual and racial identities, how can transnational solidarity networks and points of exchange be developed and strengthened? How can African viewpoints on LGBTI identities in the diaspora and issues of immigration and displacement from home communities be best addressed? What are the disconnections? Is transnational organizing viable and if so what are the challenges of organizing around queer/LGBTI concerns? How can discourses of victimhood be countered, while at the same time acknowledging the realities of violence against those perceived as LGBT/queer in the “Global South”? How do we strike a balance? How can a decolonizing analysis render more visible some of the impact of discrimination and violence against LGBT people in ‘the West’, as well as the intersections between Islamophobia, the war on terror, and the gay international? How can these matrices be countered? In what ways can feminist and LGBT struggles be bridged? Can a ‘sexual rights’ umbrella be useful for this? How can alternative discourses and organizing practices be fostered? How can we build broader and more effective coalitions?

The collection foregrounds lesbian of color activism and an intersectional analysis that connects sexism, lesbophobia and racism in feminist and LGBT contexts. Contributors also address the relationship between Queer Muslim activism and mainstream gay activism as well as mainstream Muslim communities. It draws on experiences of organizing and activism on the interplay of multiple identities to reflect upon the decolonizing practices, strategies and struggles.