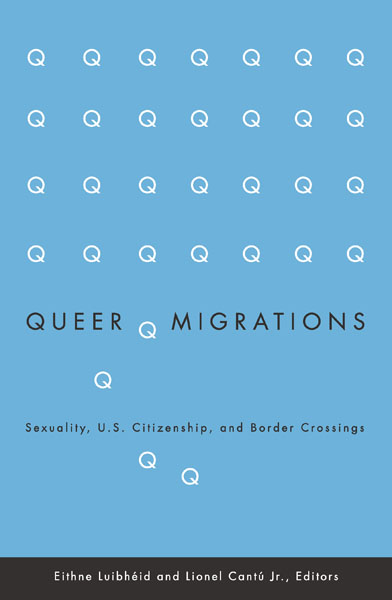 Queer Migrations powerfully unpacks the ways in which state mechanisms police borders and bodies simultaneously and is an invaluable addition to the scholarship on race, sexuality, and migration.(Gayatri Gopinath, University of California at Davis)

Immigration from Latin America and Asia has influenced every aspect of social, political, economic, and cultural life in the United States over the past quarter century. However, little attention has been paid to queer immigrants of color.

Focusing particularly on migration from Mexico, Cuba, El Salvador, and the Philippines, Queer Migrations brings together scholars of immigration, citizenship, sexuality, race, and ethnicity to provide analyses of the norms, institutions, and discourses that affect queer immigrants of color, also providing ethnographic studies of how these newcomers have transformed established immigrant communities in Miami, San Francisco, and New York.

*Eithne Luibhéid is associate professor of ethnic studies at Bowling Green State University and the author of Entry Denied: Controlling Sexuality at the Border (Minnesota, 2002).

*Lionel Cantú Jr. (1965-2002) was assistant professor of sociology at the University of California, Santa Cruz.