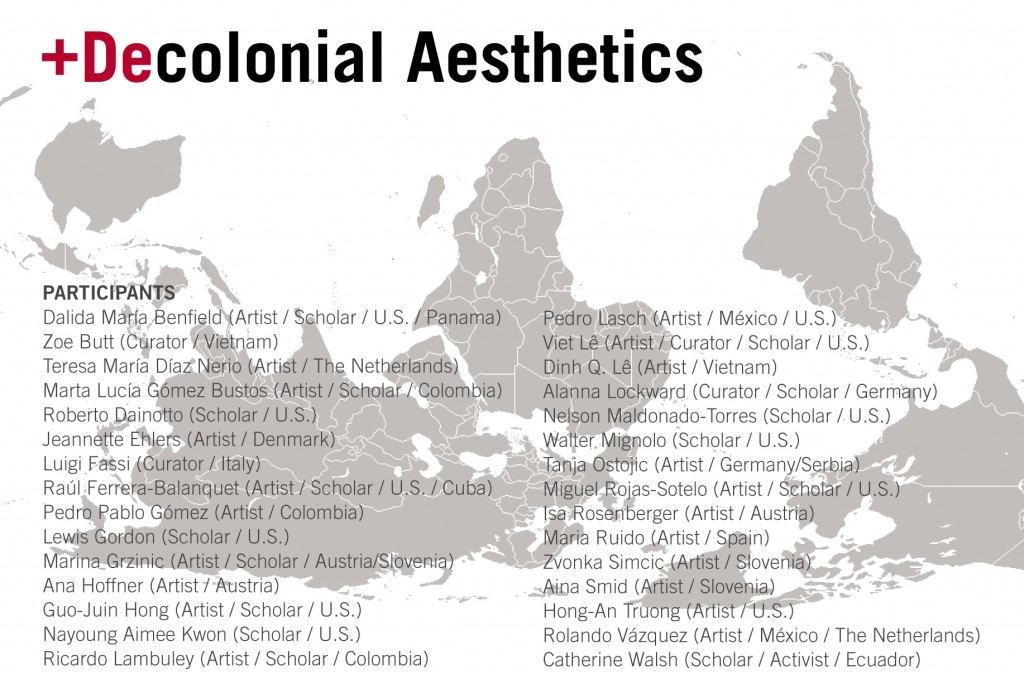 The 6th Annual Workshop of the Center for Global Studies and the Humanities, at Duke University (http://trinity.duke.edu/globalstudies) will be devoted to “Decolonial Aesthetics.” This workshop and exhibition is a continuation of the show that at under the same title opened in Bogotá, Colombia, on November 10, 2010. (http://www.udistrital.edu.co/novedades/particularNews.php?idNovedad=3170&Type=E) Although with the same title, the Duke edition will not be a replica of the former but a continuation of it. 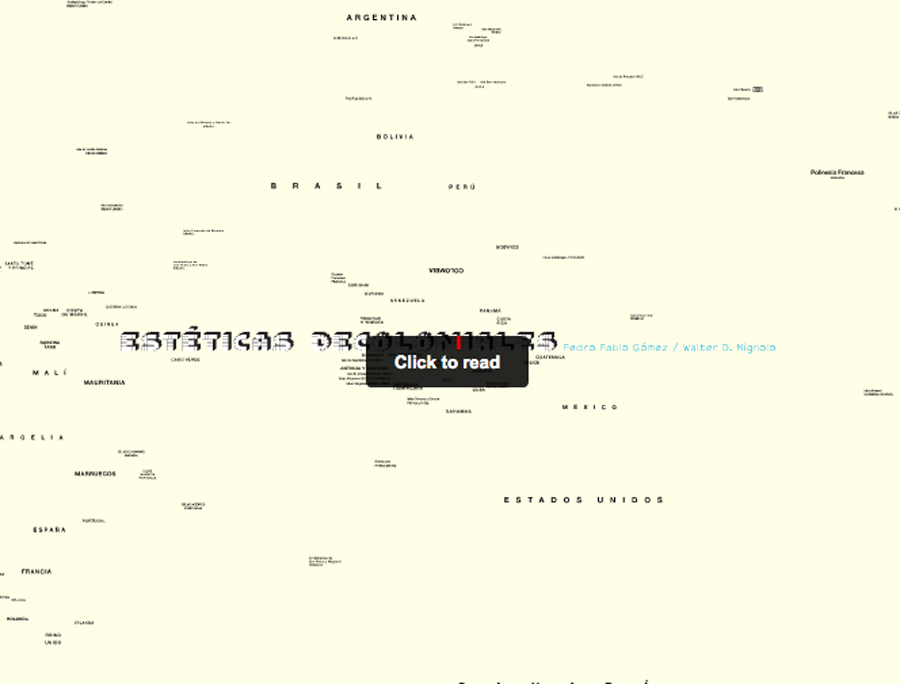 A transmodern world has emerged, reconfiguring the past 500 hundred years of coloniality and its aftermath, modernity, postmodernity and altermodernity. A remarkable feature of this transformation is the creativity in/from the Non-Western world and its political consequences—independent thoughts and decolonial freedoms in all spheres of life. Decoloniality of knowledge and being, two concepts that have been introduced by the working group modernity-coloniality since 1998 (http://es.wikipedia.org/wiki/Grupo_modernidad/colonialidad) are encountering the decoloniality of aesthetics in order to join different genealogies of re-existence in artistic practices all over the world. Transnational identities-in-politics have inspired a planetary revolution in knowledge and sensibility. The creativity of visual and aural artists, thinkers, curators and artifices of the written word have affirmed the existence of multiple and transnational identities, reaffirming themselves in their confrontation with global imperial tendencies to homogenize and to erase differences. The affirmation of identities is tantamount with the homogenizing tendencies of globalization which are celebrated by altermodernity as the ‘universality’ of artistic practices. This notion chastises the magnificent diversity of human creative potential and its different traditions; it perennially aims at appropriating differences instead of celebrating them.

Decolonial aesthetics, in particular, and decoloniality in general have joined the liberation of sensing and sensibilities trapped by modernity and its darker side: coloniality. Decoloniality endorses interculturality, (which has been conceptualized by organized communities) and delinks from multiculturalism (which has been conceptualized and implemented by the State). Muticulturalism promotes identity politics, while interculturality promotes transnational identities-in-politics. Multiculturalism is managed by the State and some affiliated NGO’s, whereas interculturality is enacted by the communities in the process of delinking from the imaginary of the State and of multiculturalism. Interculturality promotes the re-creation of identities that were either denied or acknowledged first but in the end were silenced by the discourse of modernity, postmodernity and now altermodernity. Interculturality is the celebration by border dwellers of being together in and beyond the border. Decolonial transmodern aesthetics is intercultural, inter-epistemic, inter-political, inter-aesthetical and inter-spiritual but always from perspectives of the global south and the former-Eastern Europe.

Massive migration from the former Eastern Europe and the global south to former-Western Europe (today European Union) and to the United States have transformed the subjects of coloniality into active agents of decolonial delinking. “We are here because you were there” is the reversal of the rhetoric of modernity; transnational identities-in-politics are a consequence of this reversal, it challenges the self-proclaimed imperial right to name and create (constructed and artificial) identities by means either of silencing or trivialization.

The embodied daily life experience in decolonial processes within the matrix of modernity defeats the solitude and the search for order that permeates the fears of postmodern and altermodern industrial societies. Decoloniality and decolonial aesthetics are instrumental in confronting a world overflowed with commodities and ‘information’ that invade the living space of ‘consumers’ and confine their creative and imaginative potential.

Within different genealogies of re-existence ‘artists’ have been questioning the role and the name that have been assigned to them. They are aware of the confinement that Euro-centered concepts of arts and aesthetics have imposed on them. They have engaged in transnational identities-in-politics, revamping identities that have been discredited in modern systems of classification and their invention of racial, sexual, national, linguistic, religious and economic hierarchies. They have removed the veil from the hidden histories of colonialism and have rearticulated these narratives in some spaces of modernity such as the white cube and its affiliated branches. They are dwelling in the borders, sensing in the borders, doing in the borders, they have been the propellers of decolonial transmodern thinking and aesthetics. Decolonial transmodernities and aesthetics have been delinking from all talks and beliefs of universalism, new or old, and in doing so have been promoting a pluriversalism that rejects all claims to a truth without quotation marks. In this regard, decolonial transmodernity has endorsed identities-in-politics and challenged identity politics and the self-proclaimed universality of altermodernity.

Creative practitioners, activist and thinkers continue to nourish the global flow of decoloniality towards a transmodern and pluriversal world. They confront and traverse the divide of the colonial and imperial difference invented and controlled by modernity, dismantling it, and working towards “living in harmony and in plenitude” in a variety of languages and decolonial histories. The worlds emerging with decolonial and transmodern political societies have art and aesthetics as a fundamental source.

These artists are operating in what can be seen as the conceptual legacies of the Bandung Conference (1955). The Bandung Conference united 29 Asian and African countries, and was followed by the formation of the Non-Aligned Movement, in 1961, which included former Eastern Europe and Latin America. The legacy of the Bandung Conference was the possibility of imagining other worlds beyond capitalism and/or communism, to engage in the search and building of a third way, neither capitalist nor communist, but decolonial. Today this conceptual legacy has been taken beyond the sphere of the state to understand creative forms of re-existence and autonomy in the borders of the modern/colonial world. The decolonial metaphor a ¨world in which many world would co-exist¨ implies pluriversality as a planetary project and demands the contribution of different notions of how an emerging global political society should feel, smell and look like. Decolonizing aesthetics to liberate aiesthesis has already been happening in all spheres of knowledge-production. We have been witnessing a continuation of epistemic shifts in the disciplines and the arts that have furthered the process of decolonization within and beyond the key elements of the colonial matrix of power.

The goal of decolonial thinking and doing is to continue re-inscribing, embodying and dignifying those ways of living, thinking and sensing that were violently devalued or demonized by colonial, imperial and interventionist agendas as well as by postmodern and altermodern internal critiques.

In September of 2009, MACBA inaugurated the exhibition “Modernologies”( http://arte-nuevo.blogspot.com/2009/09/modernologias-en-el-macba.html). This exhibition took place three months after the inauguration of “Altermodernity”, at the Tate Britain http://www.tate.org.uk/britain/eventseducation/symposia/17267.htm).

In November of 2010, an exhibit on “Decolonial Aesthetics” opened in Bogotá, Colombia (http://esferapublica.org/nfblog/?p=12423).

In May 4-7, 2011, a follow up of “Decolonial Aesthetics” (exhibit and workshop) was organized at Duke University http://transnationaldecolonialinstitute.wordpress.com/duke-university-exhibition/ .

This meeting aimed at creating a collective discussion on how decolonial transmodernity and aesthetics are bringing coloniality to the foreground, unveiling the darker side of modernity that continues to be a blind spot of postmodernity and altermodernity. The events at Museo de Arte Contemporáneo de Bogotá and Duke University are conceived as a response to the current European concern with modernity. However, the concern beyond Western Europe’s and the US’ discourses is “coloniality”, the darker side of modernity, and its subsequent incarnations in post and alter-modernity. Although modernity/coloniality (and its variations) originated in Europe it was (violently) imposed throughout the world. In a parallel and reversed direction, decoloniality, which originated in former European colonies and then later also in those regions subject to US’ imperialism and interventionism, has been steadily speaking back and challenging the hegemony of the modern/colonial matrix and its territoriality. The subjects of “coloniality” (the colonized) are voicing their concerns on the devastating consequences of modernity/coloniality, consequences that are perennially hidden by and embedded in notions such as ‘progress’, ‘development’ and ‘innovation’. As witnesses, components and thinkers of this state of affairs, our vision is to reach a trans-modernity, to move towards a future where coloniality will finally be eradicated, where we cease to engage in the normalized Euro-centered conceptions of human existence and socio-political dynamics. Decoloniality and decolonial aesthetics are moving in the direction of democratic futures beyond Western concepts of democracy. In order to accomplish this, it is imperative to establish that human dignity is embedded in different forms of identity and identification, this dignity is radically incompatible with homogenizing notions of ‘culture’ and the ‘universality’ of artistic discourses and practices so extensively theorized in modernity, postmodernity and now in altermodernity.

In spite of the contributions from Non-hegemonic thinkers and art practitioners that have questioned these paradigms for decades, for altermodernity the complexity of identity issues in the arts is still not considered relevant. What continues to count is the ‘universality’ of art and artistic productions are profiled and analyzed solely with regards to their contributions to the modernist normative universe of ‘aesthetics’ and ‘art’. That ‘universe’ and those norms were not originated in Zimbabwe, Bolivia or Serbia. Therefore the arguments of altermodernity are based on a self-explanatory, invisible and pervasive (white-male-Christian-Western) European identity. This silenced Norm offers the epistemic foundation for altermodern critique of identity issues while at the same time conceals its own identity as a (white-male-Christian-Western) construction. Accordingly, the Norm remains as in the most ‘productive’ moments of early European colonialism and subsequently in modernity/coloniality, as well as in imperialism/interventionism, untouched, unquestioned…

Coloniality does not operate anymore on tobacco production or on the slave trade but on the control of global finances, public opinion and subjectivity in order to perpetuate and magnify the salvationist rhetoric of modernity. For the decolonial option, identities, identification and de-linking are crucial because they assist constructed Others in unveiling the hegemonic legitimacy of ‘knowledge’ intrinsic to modernity, which denies agency and validation to the identities it constructed in the first place. Nationalism did not originate in China or the Arab World but in Europe. Nationalism beyond Europe is a derivative phenomenon—a direct consequence of coloniality. It is a two-edged sword because on the one hand, nationalism in the Non-European world provides a tool to confront Western encroachments; it is instrumental in counteracting those neo-liberal ideologies that are conveniently chastising nationalism in the name of globalization and free trade for the benefit of corporations. On the other hand, nationalism in Non-European countries could also lay the discursive foundation for the political and financial elite that would allow them to alienate and exploit their own population. Furthermore, it could also justify imperial expansion in other Non-Western countries. Emerging in between the monoculture of globalization and regional nationalist cultures, the decolonial establishes itself as an option of delinking from both globalism and nationalism by means of promoting transnational identites-in-politics beyond the globalized market, the state, institutional religions and normalizing aesthetics.

Decolonial aesthetics refers to ongoing artistic projects responding and delinking from the darker side of imperial globalization. Decolonial aesthetics seeks to recognize and open options for liberating the senses. This is the terrain where artists around the world are contesting the legacies of modernity and its re-incarnations in postmodern and altermodern aesthetics.

Aesthesis or Aiesthesis, generally defined as “an unelaborated elementary awareness of stimulation, a ‘sensation of touch,’” is related to awareness, sense experience and sense expression, and is closely connected to the processes of perception. Aesthetics, instead, is defined as a philosophical theory of what is beautiful as a rational investigation about existence, knowledge, and ethics. Thus, aesthetics was concerned with the appreciation of “beauty” and “good taste” – the domain of the artist. This definition emerged in eighteenth century Europe and can be described as modern aesthetics. In the last two decades of the twentieth century, postmodern aesthetics contested the principle of modern aesthetics and argued that postmodernist aesthetic practices may adopt any form, outlook, or agenda, new or old, and allow for other (than postmodernist) practices and alternative approaches. More recently, in the past few years, altermodern aesthetics entered into the Western debate. Altermodern aesthetics claims postmodernity is passé and that a new modernity is emerging reconfigured by globalization. Accordingly, artists are supposed to engage with this new globalized perception by means of translating values from their respective cultural backgrounds in order to be legitimized in global circuits. Identity is sacrificed in the name of globalized artistic parameters. Decolonial aesthetics continues moving in a radically different direction enabling the re-existence of decolonial aesthetics/aiesthesis.